Only I could read someone's debut novel and not know it until she starts describing it, so listen in to find out what book Carmen Schober wrote that I didn't know I read. But on top of that, she talks about her upcoming release, Pretty Little Pieces, and the fun characters in there, as well as the great deals you can get on both of these books right now!

Don't Home Renovations and Snipers Sound Like an Explosive Romance?

Okay, an author who loves to write women's fiction BUT romance as well, and with a strong faith arc for multiple characters? Does Carmen Schober sound like the perfect author for me or what?

Carmen's debut novel, After She Falls, (I totally misunderstood her before we got started), deals with one of her personal passions--fights! (The organized and legal kind, not the cat fights outside bars on a Saturday night!). It also deals with domestic violence, single parenting, and facing your past.  And boy does Audrey have a past to face.

Then she goes off and writes her upcoming release, Pretty Little Pieces, and whoa! Could it be more opposite? Down we go from Pennsylvania to the Nashville area and dig into all things Southern. Small towns, country roads, food. Oh, and flipping houses?  Top that off with a house flipper falling for an ex-sniper, and... WHAT?  Yep. It's a thing, folks!  And I'm dying to read it.

We chatted about faith in fiction, romance in fiction, what readers expect and don't... it was a blast, and I can't wait for her next book. I mean... Cuban mafia? Bring it on! (She's delightfully eclectic. I love it!) 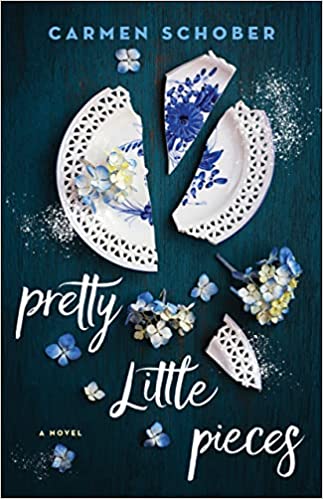 Ambitious influencer Georgina Havoc and her designer beau Lance Broussard have been dubbed the next Chip and Joanna Gaines, but their happily-ever-after falls apart when Lance blindsides her with a "pause." The show must go on, so Georgina takes on the task of renovating a forgotten cottage in the tiny, tight-knit town of Tarragon, Tennessee on her own.

Georgina has a plan to save her relationship--and her show--but a surprise drop-in from her troubled twin sister makes things extra messy. That, and the presence of rugged ex-sniper Cassidy Stokes, who throws a wrench in all her plans.

As she salvages her shattered life, will Georgina retreat to the familiar or embrace a new design?

You can learn more about Carmen Schober and her books on her WEBSITE.

You can enter the Goodreads Giveaway Carmen mentioned HERE.

And you can get the book deals on Baker Book House at:  Preorder Pretty Little Pieces and get After She Falls at 50% off!