I seem to be on a dystopian kick.  It began with Jess Corban's Nede Rising duology but then a couple more were suggested to me just a couple of days after I chatted with Christian Cross about his book Extraction: A Song for Emma. Perhaps there's a reason, eh?  Listen in and discover where Christian got the idea for his book, how long it took him to decide to write it, and if a guy who claims not to like to read or write... is going to write more!

Do You Think the Future Be Cool, Scary, Crazy, or What?

Historically speaking, civilizations rise and fall.  I mean, think about the Roman Empire with plumbing and education, arts and legal systems that were pretty cool... until you then look at Europe during the Dark Ages. Based on choices the Modern Era has chosen, history points to an upcoming decline, and Christian Cross tackles one tough possibility in his debut novel, Extraction: A Song for Emma.

When we talked, Christian described getting the picture of something chilling enough for him to go around campus in college and ask people what they thought of the idea. The result, all these years later, looks to be a trilogy beginning in Indiana. I don't know where it will lead from there (if anywhere), but they're definitely on the run in this one.

Written in present tense, I wasn't sure I'd be able to get into it, but it only took a few paragraphs for me to wish I didn't have to stop and record the interview! It's definitely on my TBR. EEEP!

While Christian says he didn't enjoy writing or reading, since finally saying, "Yes, Lord" to this project, he has learned to enjoy the process and has found audiobooks to help him enjoy reading more. he's even working on getting this series on audiobook. I'm sure he'd appreciate prayers for the right narrator and such on that one! 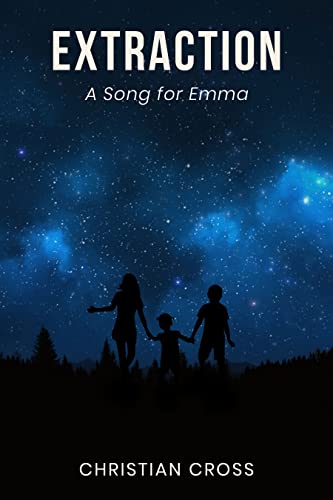 Extraction: A Song for Emma by Christian Cross

In the near future, Hannah (age 16), her younger brother Loghan (age 11), and her younger sister Emma (age 5) are on the run aided by a man named Shane. Hannah hears that Shane’s a kidnapper on the news. Is he out to help or put them in more danger?

A few months earlier, Hannah, Loghan, and Emma lived in one of the nicest suburban neighborhoods in Potsville, Indiana. Emma’s health has been deteriorating for some time, but now they’re noticing. After a doctor’s diagnosis, Hannah and Loghan become suspicious that something sinister is going on. Before long, their lives are turned upside down as they try to determine what’s going on and save their sister in this dystopian society.

Time’s running out for them to discover the truth. Will Hannah and Loghan be able to save their sister, and potentially themselves, in time?

You can learn more about Christian Cross on his WEBSITE.